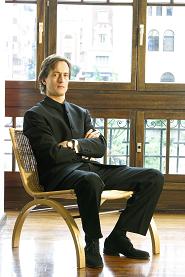 Since he began his career in 1991, Gregorio Gutiérrez has regularly worked with numerous orchestras and theatres, both in Europe and in America. His work as conductor has never passed with indifference to the public, criticism and own orchestras.”And it is that Gregorio Gutiérrez is a conductor who knows working with the musicians and understands them. The results are, of course, those of an artist who take care of the detail and delivered in soul and heart to the work to perform, therefore, the public knows, thanks and applauds him” (Juan Piñera, Composer and critic. La Habana Radio 10 mayo 16)

Since he moved his residence to Istanbul (2018), Gutiérrez extended his professional projects to work with the major (principals, most important) orchestras and theatres of Turkey, as well with neighbor countries and the Arab world. Also continues his work as Principal Conductor and Artistic Director of the Canary Sinfonietta (sine 2016) and Artistic Director of the Canary Religious Music Festival (since 2005), without abandoning its commitments to orchestras and theatres , European and American.

The Maestro Gregorio Gutiérrez has developed an intense career linked to lyric theater and dance, working numerous Opera Houses and prestigious Ballet Companies. His repertoire includes titles such as Carmen, La Bohéme, Tosca, Barber of Seville, Don Pascuale, Rigoletto, Eugéne Oneguin, The Beautiful Helena, and the world´s premieres of “ Clara and the Shadows” by Juan Manuel Marrero and “Never More” by Yuri Kasparov. Interested also in the zarzuela are many interpreted titles: Doña Francisquita, Barberillo of Lavapies, Verbena of La Paloma, The Oath, Goodbye to the Bohemian, Agua, azucarillos y aguardiente, among others. In the field of the Dance the great titles of the Spanish and Western (Occidental) repertoire: The Three Cornered Hat, Love the Magician, Nutcracker, Lake of Swans, Estancias, Pavana Real, Don Quixote…

Gutiérrez has developed an interesting work in the field of recording. For record market he has published with Naxos, Verso, Karonte and Autor. Works by Piazzolla, Mederos, Villa Rojo, Marco, among others.

His great ambition by bringing music to unusual public has led him to make countless concerts outdoors, in schools, universities, work places and prisons. He has directed many concerts especially dedicated to children, youth and family. Result of his concern cultural and aware of the importance of the ethnic and popular music has collaborated with numerous musicians of jazz, tango, pop, world music…

The musical education of Gregorio Gutiérrez (Tenerife 1962) runs between the Tenerife Academy of Music , the Royal Academy of Music in Madrid, and the Tchaikovsky Academy in Moscow, where he studied Symphony and Opera conducting with the Maestro Prof. Yuri Simonov.

Stay informed about my latest news and upcoming concerts